This post is a (not so short) summary of the wonderful 1972 paper entitled: “Programming Languages: History and Future” by Jean Sammet[1]. She is not only one of the first (computing science) historians but also a language creator.

The paper is written in a highly enjoyable style and if you are remotely interested in programming, reading it is surely going to reward you. This paper focuses in the historical development of the languages and their interrelations. The key piece in this paper is the chart below where the relationships between programming languages is shown. The graph makes more sense with certain context. 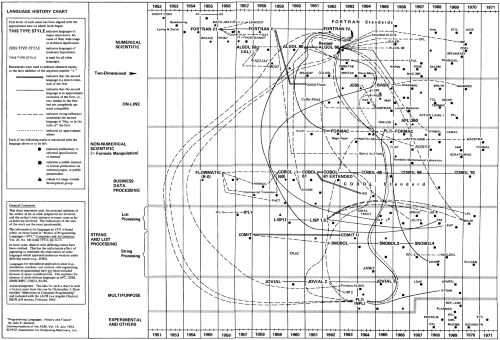 link to bigger version of the graph

On the definition of a programming language:

A programming language is considered to be a set of characters and rules for combining them which have the following characteristics:

The scope of the paper is roughly 20 years, going from 1952 to 1972, when, according to the paper there are about 180 programming languages.

Given that this paper context is history, When do you consider a programming languages started? or created? It is something that I encountered as a problem when I was doing some reading on this area and not only dates are not always documented, but also the stage of development at which a defined specification occurs varies, or can be iterated over to become a new version of the language, and in that case, is this the same language or should it be considered a new one?

Why so many languages?

I wish 2 would happen more often. Can’t think of an example for 3, anyone? Perhaps 5 would be different because I think funds are not really necessary but probably a good idea, I am thinking of Elixir, Elm as great examples of projects that started.

Reasons for the importance of a language

This section has the most memorable quotes (stuff that is still sadly true, 4 decades later):

For example, the psychological issue of snob appeal is more important than many people might think. Thus, the personal prestige and leadership (or lack thereof) of those individuals who are involved in the development of a language play an enormous role.

The best example of languages which inspire some people are ALGOL and APE\360; on the other hand neither BASIC (at the small end) nor PL/I (at the large end) generate as much personal enthusiastm

Major Languages (at the time)

This is my favourite section of the paper. The languages below have been chosen because of their relevance as well as their uniqueness (except Cobol), they also apear to have been developed independently of each other.

In this section, Sammet highlights some concepts.

Starts of with the Backus Normal Form, introduced by John Backus (since it is so relevant to the history of PLs I guess the mention tried to highlight the historical impotance).

The significance of a formal syntactic notation is threefold:

There is also mention of the formal semantic definitional techniques, where McCarthy and IBM Vienna Laboratory are key contributors. IBM Vienna created the formal definition for PL/1

The monumental size of the formal definition of PL/I precludes it from .being of current practical use. However, it is a major conceptual part of a currently unsolved problem in all of programming which is how to determine whether a program does what we want it to do.

Then The attempt at designing computers whose instruction code is a higher level language, significant concept, not yet achieved (I have to admit I don’t know anything about this, feedback or related links most welcome)

Finally , there is User defined languages have been an area of interest for many years. Is this what we call DSLs these days? ( I’ll need to read up on the references), it kind of sounds like it, tho they talk about directly giving access to users.

This is really interesting, at the time these were the interesting topics:

Cool stuff particularly when you think about the research that became into being around that time with type systems.

The rest of the paper goes of to talk about what seems to be the future. Most predictions have more or less become real.

The user could use his native language, including notation (e.g. algebra, molecular diagrams) appropriate to his particular field. This concept does not envision one single computer system understanding all of English. It does envision many systems, each of which is capable of dealing with a particular field…

the next best thing will be user defined languages. By this we mean (software) systems which permit users, first, to define languages that fit their own needs with respect to functional capability,jargon, and personal tastes in style

While the day of asking the computer to “COMPUTE THE PAYROLL FOR MY COMPANY” is at least one or two decades in the future, I believe we will see a large decrease in the amount of detail a user must provide.

The use of current languages is not likely to change drastically for many years. It seems likely that FORTRAN and COBOL will be with us for at least five and probably ten more years.

ALOOL 68 will … namely inspire another round of development of implementation techniques and devotion to elegance in language with less concern for the practical world. It seems virtually certain that ALGOL 68 will not become widely used in the United States, and probably not elsewhere.

Computers are now becoming common… To determine the real effect–both direct and subliminal–of this education on the next generation requires a better crystal ball than this author possesses…people will grow up recognizing the computer as a tool for everyone, just as the automobile, the telephone, and the stove

Wow…feels like I was just in a great alternative version of Back to the Future, :D.

If you want to discuss this post, the best place right now for me is twiter, please @silverspoon with your comment/question.