Lambda Days and dev At Lodz

I spent part of the past week in Poland, I landed in Łódź (if you are not a Polish speaker, look up the pronunciation). Totally extreme friendliness. I felt right at home, maybe there is something to do with my last name :D. Thanks so much for your superb welcome, and once again thanks to Kuba for driving from Lodz to Krakow (I owe you a drink). 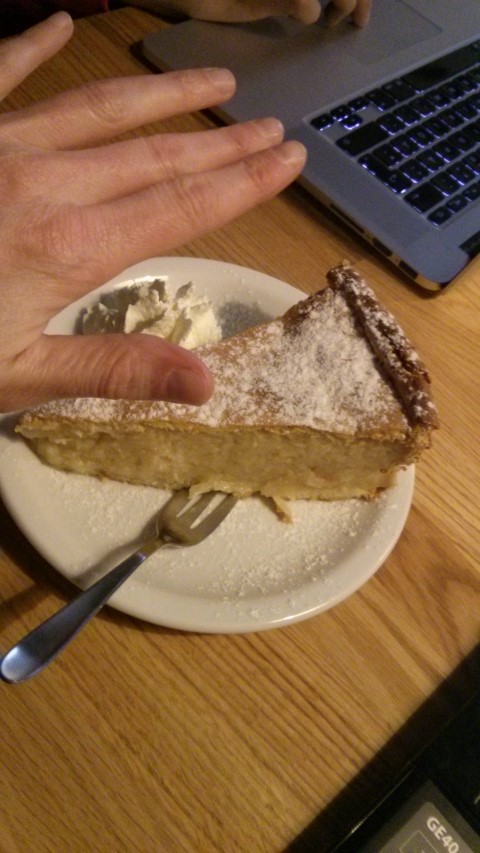 I think Poland is a great country, I have a lot of respect for countries that take their pastries seriously and with high availability. 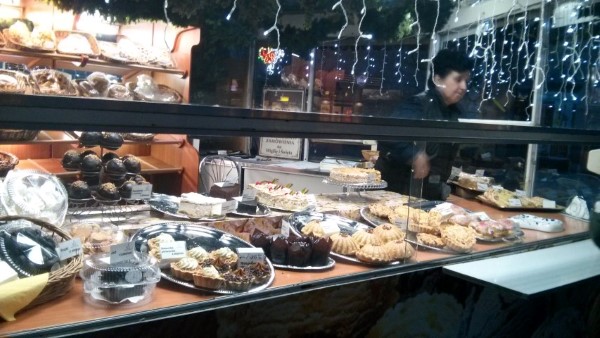 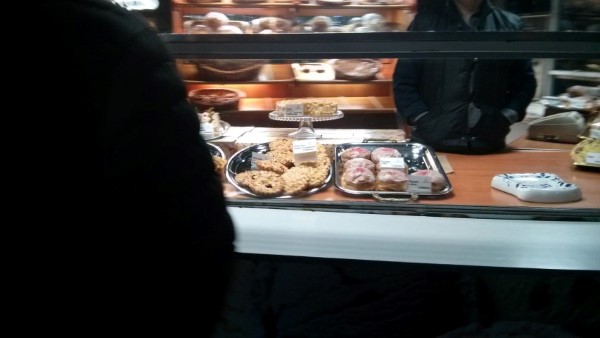 I was really curious about how a group that is about programming cross domain, cross platform, basically anything goes would work. I was pleasantly welcome by a highly engaged and fun audience. Kudos to you!

I am still not sure how to report on my own talks :D. Suggestions welcome.

After my talk there was another talk about Romantic Web:Relation Object Mapping for semANTIC WEB in .net. Certainly a catchy name :). The claim is that “RomanticWeb is the world’s first ORM class solution for graph-based data written fully in C# that allows developers to work with the RDF data in a way the would work with any other data in an object oriented manner. This can be achieved by creating data models that can then be mapped to RDF statements in a fully transparent way” it looked interesting tho a bit heavy on boilerplate, I am still not clear where would you use something like this, but, as always is cool to see things you don’t know about. 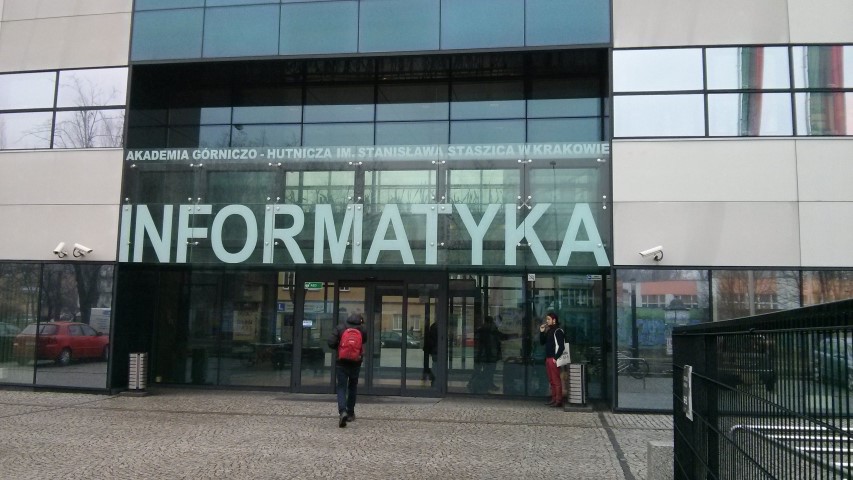 The day started with a talk by Garreth Smith. In his talk he described how he has been trying to rediscover the joy of coding through some experiences with his son using Scratch. The talk was very entertaining, and there was a few hints of something to take away, I think he was trying to encourage us and himself to be a little more open about what it means when someone tells you something feels good (from a programming point of view) and how we can learn from that (or something). I think he was on to something but didn’t drive it all the way home, though topic. I really hope we get more iterations on this. He recommended The timeless way of building and it looks interesting enough to pick up. 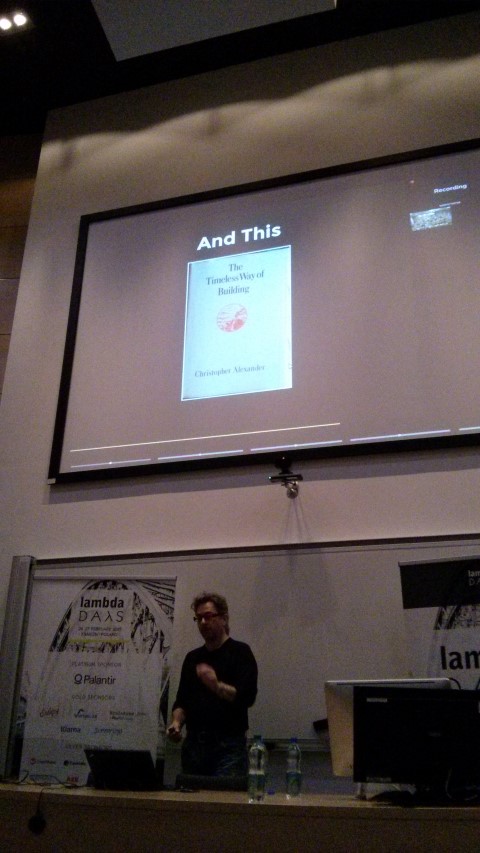 I had some hallway sessions and then I went to Rafał Studnicki’s talk on running Erlang on 32k of Ram. It turns out you can run. This was a talk in a series of 15~20 min talks about research papers. Interesting format. 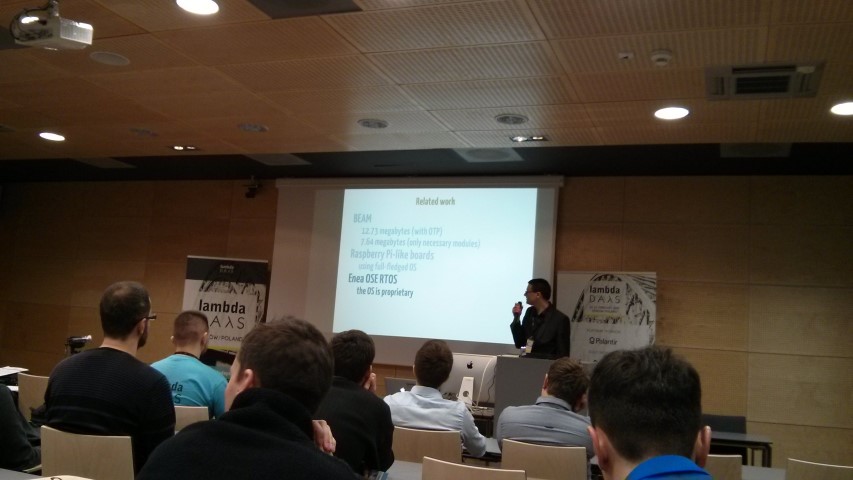 After lunch, it was Evelina Gabasova’s turn to talk, she had a quite large room-full of people. The talk went over a comparison of other tools used for research in cancer and how she uses F# and the type providers to do better Science. One bit of info I didn’t know about, men can also get breast cancer. 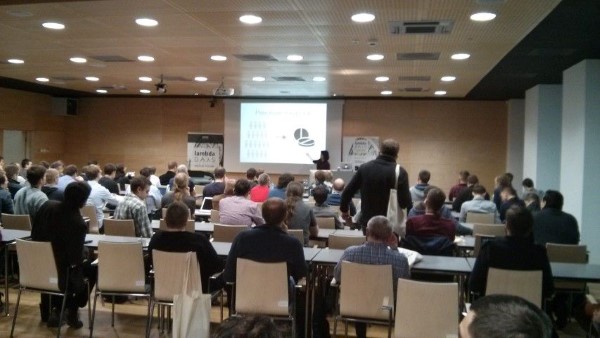 After that I went to “A year of Haskell” by Justin , this was a cool talk, if someone can go and set up a start up in Ecuador that does Haskell and it’s working out, well this is pretty inspiring. :D He mentioned the pain of supporting ageing Rails projects and how he found Haskell a good alternative. A not precise quote:”Haskell is easier to learn than Ruby”. The tone of my comments here leave out how he is really not trying to force this on you but rather, he is talking through his own experience. This is what is like when you get to an existing Ruby project 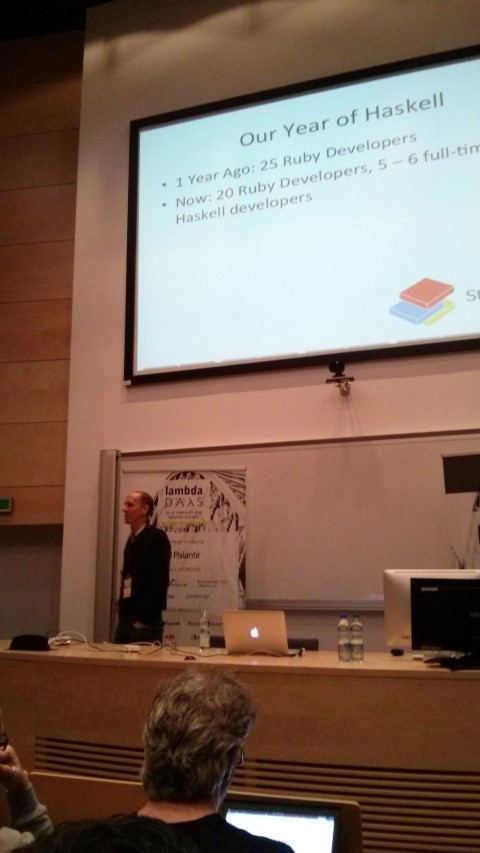 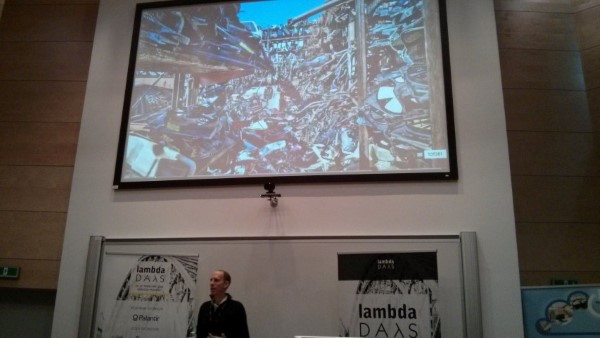 Then it was my turn to give a talk. My slides are here thankfully I have no pictures.

In the party, there was pizza and beer and a lot of talk about types. At some point Edwin Brady said something around the lines of “I would write a php backend for Idris” (there is a story behind the beer tokens you see in the pics), this was immediately twitted by Alvaro Videla a few days later Edwin sent this tweet around: 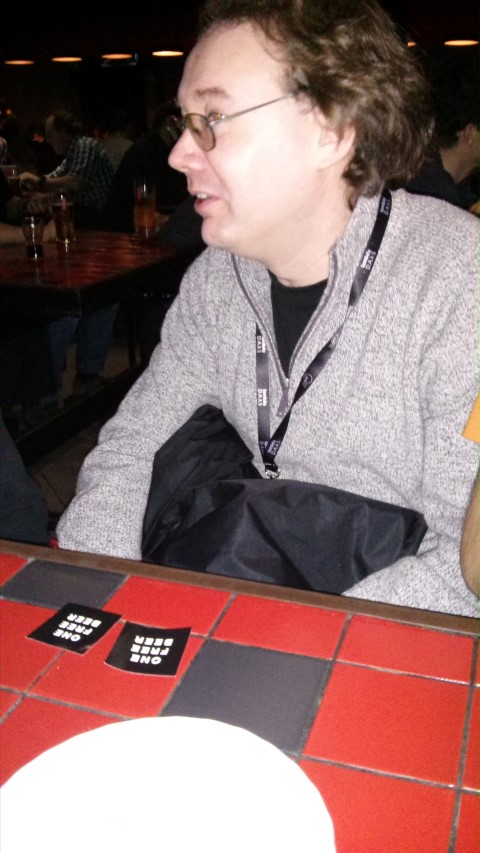 Can I have a Turing Award now please? Or does this rule me out for life? https://t.co/ByV8hpl7fM @old_sound & @silverSpoon did pay up front

Day 2 of Lambda days started with a talk by Kinga Panasiewicz, a neuroscientist. She did a super interesting talk about how our brains work, I would like to see more like it. In the talk she mentioned the effects of too much light before sleeping time, how poor our memory is and other things that I can’t remember (maybe because I am trying to remember more than 7 things?). 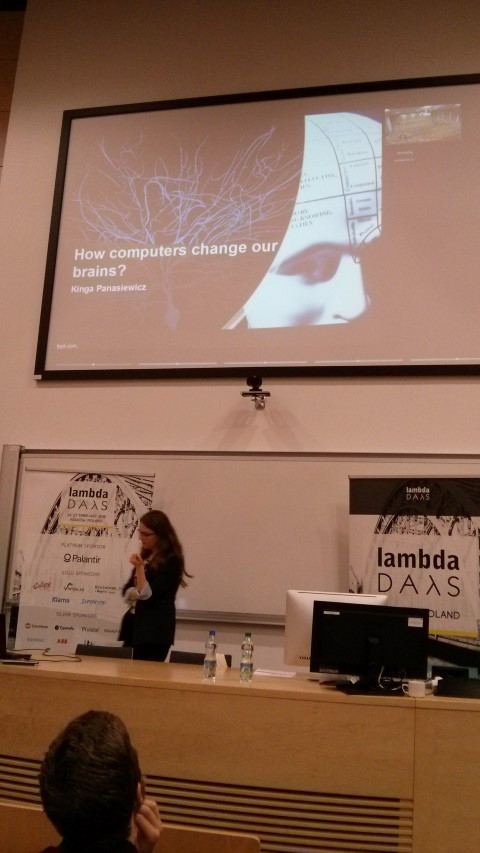 Scala, Akka, Play: The Why and How of reactive web-applications on the JVM by Manuel Bernhardt, admittedly Scala is not something I know much about at the moment, but I thought it would be good to learn a little bit more about it. On this talk Manuel went over the basics of Scala, Akka and Play super fast and went on to explain how they work together. One of the gems of this talk was when Manuel showed how Mailbox works with an example from Star Wars please skip for spoilers. 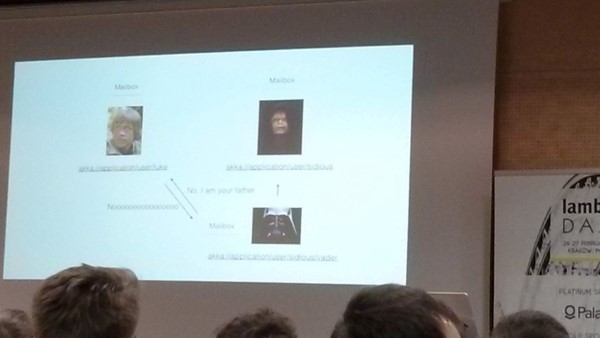 After that I went to a talk called Implementing graph representation model for parallel and distributed systems using Erlang, this talk was a little confusing, there were many definitions at the start and then a bunch of graphs, the graphs showed some sort of really good performance metric, but I really couldn’t understand much of it, I am going to put it to lack of sufficient tea, too early :D. I am also sorry I forgot that at the same time Tomasz Jaskula was giving a talk about F# that got really good comments.

After that I went to Alvaro Videla’s excellent talk about RabbitMQ, he had a live simulation of how things worked that I really enjoyed. He talked about the internals of RabbitMQ and the result of that is that I am more and more curious about Erlang; I wish the recording of it was online already. 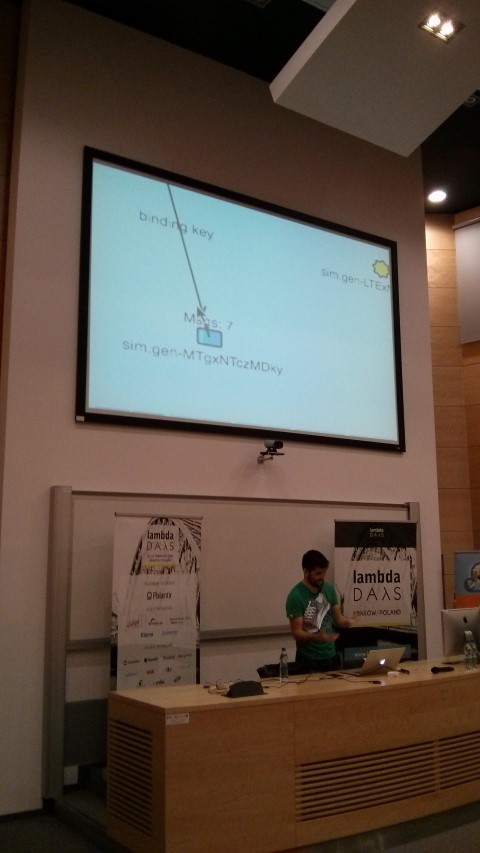 After that I went to a talk by Michał Łusiak his talk started super well because his first slide was a picture of a bridge in Dublin, and he was talking about type providers, something I have been interested of late the talk was pretty cool as he went on showing many existing type providers and their use cases, including the ones that seem rather useless but are fun (like squirrelify) :)

Finally Tomas Petriceck had a cool talk on literate programming, he was talking about the origin of literate programming from Knuth and trying to rescue the feel of it and bring it into F#. He was missing some graphs so he created a DSL for making them and he said he would make it available, which he did slides and code a few days after the talk (and prompt me to finish this post). As always there was another talk I wanted to attend to too but sadly you can only be in one place at a time. 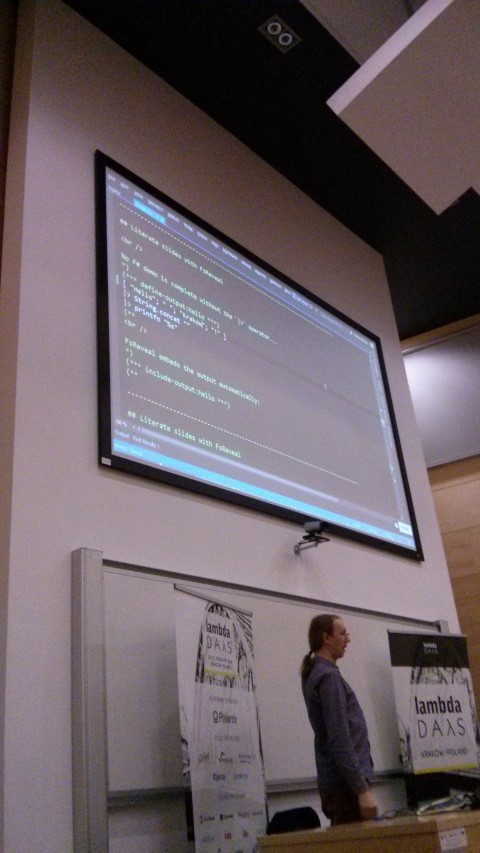 After the conference a good few of us went for dinner, Lambda Days and Krakow was super fun :) Big kudos to the organizers and everyone involved in making it happen. 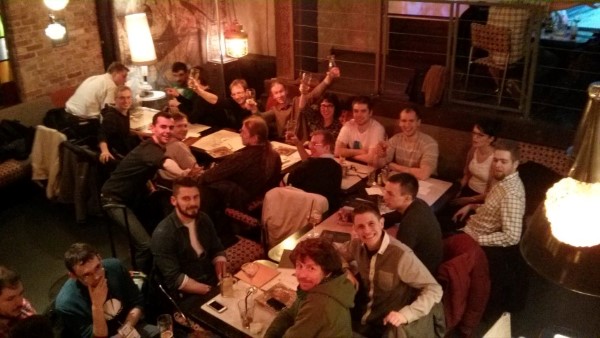